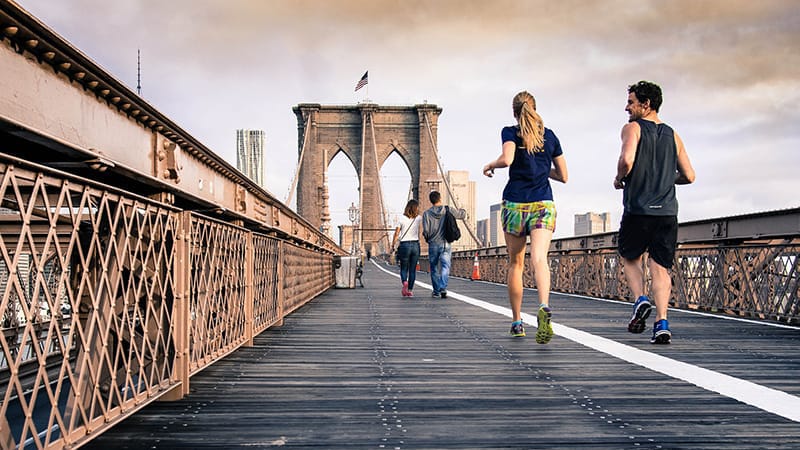 Posted at 06:50h in Organic-Lock Information by Envirobond Products Corporation 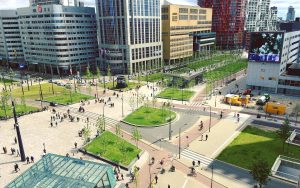 More Americans than ever live in urban areas – up to 82% according to World Bank statistics [1].

Big city living has a range of benefits, but residents need to be mindful of their health, as it is all too easy to lead a sedentary lifestyle when every convenience is at your fingertips.

It is for this reason that active living is becoming an increasing focus of municipalities across the country.

The concept is a simple one. Active living is all about integrating physical activity, such as walking or biking into your everyday routines.

Unfortunately, since the advent of motor vehicles, cities have been designed with the car in mind more than the pedestrian [2].

In order for active living to make a real impact in our major cities, there needs to be a real effort made to redesign the urban landscape and make it far more walkable.

Why Walkability is so Important

Instead of finding time for a gym session, residents of a city set up for active living can get a large portion of their required exercise from their daily activity [3].

This is an obvious solution to obesity and other lifestyle related health problems, but there is one big problem. US cities have not been designed with the pedestrian in mind, making active living difficult.

Walkability in urban centers is the key to active living and a healthy and happy populace. To achieve a high level of walkability, cities need to be designed to prioritize pedestrian traffic [4].

For a walkable city to function, a person’s home, work and favourite shops must be within walking or biking distance and longer trips should be possible with mass transit [5].

Not only does walkability make sense from a healthcare perspective, it also has monetary benefits, with less expenditure on healthcare and facilities for cars such as parking. There is also research to suggest that more money is spent per person in restaurants and retail outlets in walkable neighborhoods [6].

Many city residents have come to this realization themselves and are beginning to demand that city officials take action.

As many as 63% of millennials and 42% of Baby Boomers in favour of cities that promote walking and biking over driving [7].

There is demand for walkability and the benefits are clear, but how exactly can more walkable cities be created?

How Walking Can Be Encouraged

Making the transition from a car focussed city, to one that emphasizes walking and biking is not as difficult as you would think.

With even minor changes to city planning and landscapes walking can become a much more attractive proposition.

The following are just some of the ways in which cities across the country have begun changing the urban landscape to be more pedestrian friendly.

One of the first things that need to be done for a city to become more walkable is to create mixed use areas through city codes and zoning.

City zoning needs to allow for shops, offices and even light or boutique industrial to be within walking  or riding distance from living areas if walking is going to be a valid choice for city dwellers [8].

A great example of this is in Melbourne, Australia, where the city government has committed to creating ‘20 Minute Suburbs’.

These suburbs are being zoned so that everything a person needs, from their workplace to supermarkets or their favourite cafe are no more than a 20 min walk or bike ride away.

You may not pay it much attention, but parking is everywhere. Studies have shown that there could be as many as 2 billion parking spaces in the US, far exceeding the total number of cars [9]

Many of these utilize public space and are given away for free! It has been suggested that parking in general is not correctly priced given the space it occupies in our cities.

Economists have discovered that one of the easiest ways to discourage parking and have people instead use public transit or walk is to increase the price of parking, while also decreasing the total number of available spaces [10].

While this can cause a backflash from car owners in the beginning, it needs to be seen as a reclamation of public space that can be used for the convenience of all, not just car owners.

Even in the most well designed walkable city, some people will still need to cover longer distances and the most efficient way to do this is with mass transit.

Buses, trams and trains are all much more environmentally friendly ways to get around with lower emissions and less city space used than individual cars.

Biking is also a great way to get people active and transport the to where they need to go.

The addition of bike paths and prioritizing bicycle traffic over motor vehicles within the city limits are simple ways to encourage their use.

Many cities across the country have also instituted bike sharing schemes with great success, with many now going ‘dockless’ with the help of big tech companies [11].

When you don’t even need to own your own bike, there is nothing stopping bicycles replacing cars as the transportation of choice in modern cities.

It goes without saying that for a walkable city to work, priority needs to be given to pedestrian traffic over vehicle traffic.

This means the introduction of more crossings, creating pedestrian only plazas, or having shared roadways with pedestrian right of way.

Measures such as these encourage walking, while discouraging driving and have a big impact on the walkability of a city.

Get The Landscaping Right

It may not seem like it, but landscaping, particularly the placement of trees and gardens is a critical step in increasing walkability [12].

For someone to make the decision to walk, their route must be enticing and especially in warm climates, shaded from direct sunlight.

Including more trees in the urban landscape makes walking much more pleasurable, makes the entire area greener and is great for the environment.

There is also another aspect of landscaping that does not get the attention it deserves, but has a massive impact on walkability – hard paved surfaces. 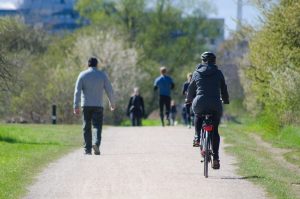 City landscapes, whether designed for walking or driving have one thing in common – a large area covered in hard surfaces.

Hard paved areas are necessary for both humans and cars to safely and effectively move from point A to point B. Afterall, no one wants to trek to work through the mud.

Traditional hard surfaces have a big problem, which is a lack of permeability. These surfaces do not allow water infiltration, impact the natural recharge of aquifers, cause harmful runoff into local waterways and can even exacerbate flooding [13].

The good news is that advancements in the durability of natural, more porous surfaces mean it is possible to create walkable pedestrian paths that are also environmentally friendly.

Natural aggregate paths utilize natural materials that allow for the natural flow of water, while also looking and feeling much more natural.

This material traditionally has one big drawback – a lack of durability and susceptibility to erosion. With the introduction of stabilizers such as Organic-Lock™, this weakness has been eliminated.

Paths made of aggregate, stabilized with Organic-Lock™, are just as strong as impermeable concrete or asphalt, are easier to repair and have a lower lifetime cost [14].

The environmental impact is also hard to ignore, with natural surfaces heavily recommended by organisations such as LEED, who set standards for sustainable construction [15].

Most important for walkable cities, these natural surfaces maintain disability access, feel much more natural underfoot and are much more aesthetically pleasing than the straight lines and hard edges of traditional paving materials.

Walkable Cities Are The Future

With increasing environmental consciousness and a real willingness of city residents to make a sustainable change in the way our urban areas operate, walkability is only going to increase in importance.

Next time you are designing a new project, keep walkability in mind.

Not only is it great for the health and well-being of city residents, it can also deliver great environmental benefits with the right material choices.

[11] Scmitt, A. (2018). Five Ground Rules to Help Cities Get the Most Out of Dockless Bike-Share. StreetsblogUSA. https://usa.streetsblog.org/2018/05/21/five-ground-rules-to-help-cities-get-the-most-out-of-dockless-bike-share/ 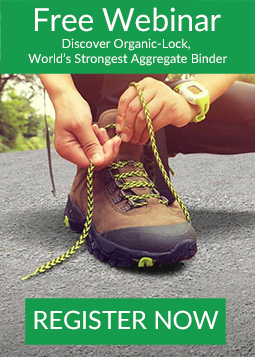